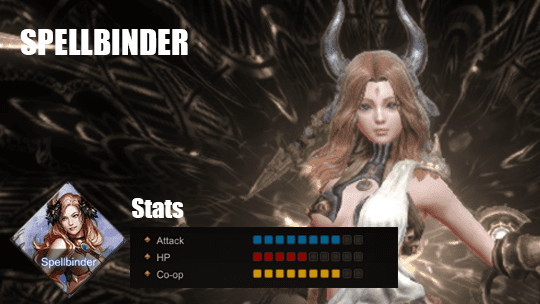 The Spellbinder, MU Legend's long-awaited new character, plays a supporting role in battle using buffs, debuffs and ranged attacks. She controls a Chain Blade and Chakram with her psychic power, and she reigns over the battlefield using her various barrier skills.

This post outlines some of the most important skills in the Spellbinder's arsenal, from the lower levels right up to level 65. 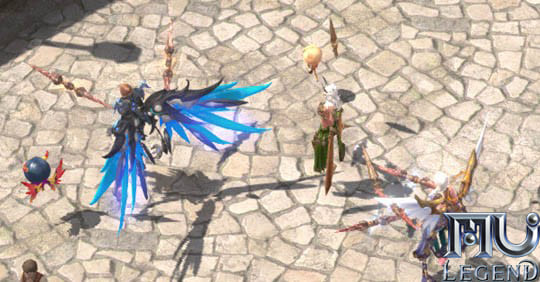 ▲ Spellbinders are easily spotted in towns

■ The Spellbinder: A barrier-using support character

The Spellbinder, the second female character of MU Legend, is a support mage that uses her powerful psychic power to attack enemies, give buffs and debuffs, and perform AoE crowd control. Extraordinarily, she wears horns instead of a helm and stands out from the crowd in her beautiful outfits.
Her powerful attack performance and useful support abilities in parties mean she's a very versatile character, which, in turn, makes controlling her on the more difficult side. While buffing allies and debuffing foes is her standard play, she can also destroy her enemies from range in both 1v1 and multiple-opponent battles. In other words, she suits both users who like to play a supporting role in parties as well as those who prefer solo play.

Users can choose between the two-handed "Chain Blade" and the one-handed "Chakram", and the range of both weapons is very long. The Chain Blade has a passive effect that increases attack speed by 5%, and the Chakram passive decreases enemy armor by 10% for 5 seconds each time the main weapon lands a hit.
Most of the skills work to support parties by creating a barrier over large area. Within that area, friendlies will get buffs, while enemies will gain debuffs. Therefore, these skills dont recover party members health instantaneously as with the Dark Lord. With multiple buffs, however, players can make aggressive combinations using these barrier effects.

Also, this is the first character to possess a strong crowd-control ability, "Mutation", which changes the shapes of enemies. Although her defense is not high, her instant-movement abilities and invincibility skills significantly boost her chances of survival in battle. 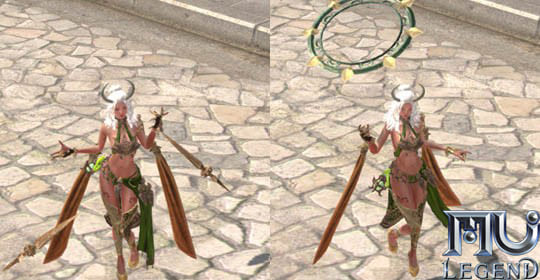 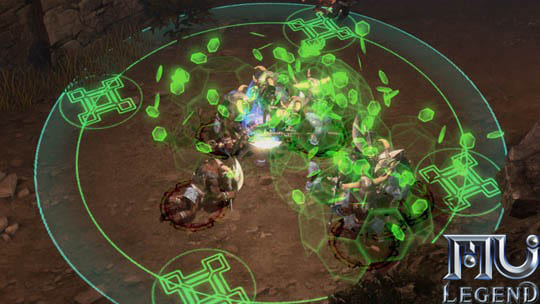 So, what approach should users take with their new level 65 Spellbinder? Some might prefer the Chain Blade over the Chakram. This is because when a one-handed weapon is dual-wielded, they inflict greater damage than a two-handed weapon alone. Plus, a faster attack speed gives players an added advantage. War Mages and Whisperers also use one-handed weapons in this way.
For those who prefer the Chain Blade, the recommended skills would be "Chain Blade Spread" and "Ghost Chain Blade". For Chakram fanatics, "Spinning Blade" would be the one to go for. In addition, there are various other skills that are also worth noting here.
"Counter Barrier" and "Protection Barrier" are utilized to buff the caster and the party members. "Counter Barrier" boosts attack power by 520% while also increasing it for allies. Enemies attack power also gets decreased by 10%, killing three birds with one stone.
"Protection Barrier" grants immunity to attacks for 1.5 seconds, making it the single most powerful survival skill for the Spellbinder. On top of that, it grants a 10% damage reduction to friendly characters, reflects 95% of the damage of enemiesattacks and inflicts a 20% armor debuff. These two barrier skills are very versatile, being defensively useful in both solo and party play, and also effective for damage dealing. 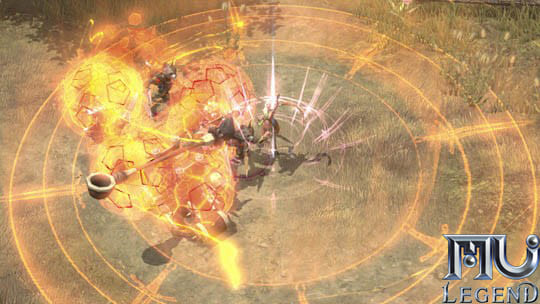 Along with barrier skills, movement skills like "Steps of Light" and "Illusionary Image" are also important. "Steps of Light" inflicts continuous damage to surrounding enemies for 8 seconds, increases movement speed by 50% and ignores collisions, enabling fast clearance of solo dungeons.
"Illusionary Image" instantly teleports the character to a selected area and increases alliesmovement speed by 8%. This skills key use is in evading enemy attacks, rather than using it for its buff.
"Time Barrier", which is an expert skill, blocks all abnormal effects around the caster, while increasing movement speed. Additionally, the skill inflicts 850% attack power and decreases enemy movement speed by up to 90%. 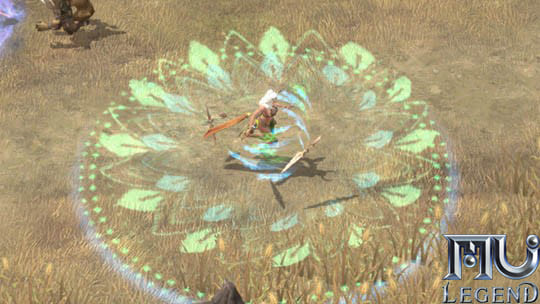 "Hopes Call", which releases hope energy around the caster, stuns enemies for 1.5 seconds and is an important skill for crowd controlling. It immobilizes nearby enemies and is very useful when fleeing is necessary. This skill can also wipe out enemies by raining down strong AoE attacks onto stunned opponents.
"Flower of Death" and "Storm Shuriken" are also useful attack skills. "Flower of Death" inflicts AoE damage by spreading death energy around the caster, which marks enemies for 3 seconds. Marks inflict 75% damage when they disappear, and when a marked enemy dies, it explodes and inflicts damage to 5 additional enemies in the vicinity.
"Storm Shuriken", which is one of the skills the Spellbinder acquires at the beginning the game, is a simple AoE skill in which a shuriken is thrown at enemies in front of the character. However, not only does it have a very small MP cost, it has no cooldown time, which makes it the ideal skill to use repeatedly. Therefore, it can be considered the most basic skill.
Other than that, skills like "Bloody Flower", "Iron Stinger", "Illusion Rampage" (DoT), "Phantasmal Rain", "Illusion Gate", "Telekinetic Storm" and "Chakram Blade" can be used for attacking, while "Life Barrier" can be used to recover HP. 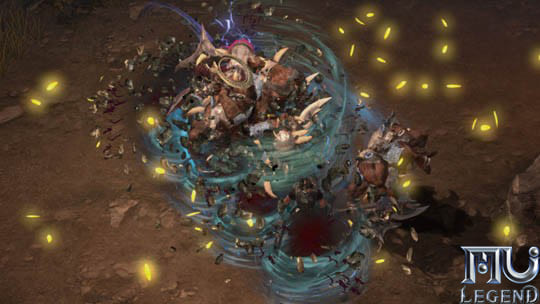 ▲ Skills used for attacking depend on the user's preference 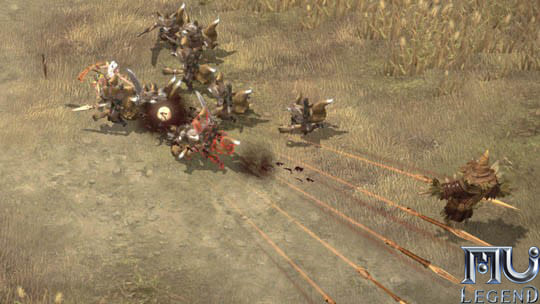 ▲ "Storm Shuriken" has no cooldown time

◎ What about the Spellbinder's passive expert skills?

"Celestial Prayer" and "Hopeful Will" are the two key passive skills for the Spellbinder at level 65. The next in line would be "Essence Absorption", "Time Warp" or "Spiritual Stimulation".
"Celestial Prayer" increases the buff times of all barriers by 20%, and it can be acquired at level 45. "Hopeful Will", which can be acquired at level 65, decreases the cooldown of all barrier skills by 1 second.

Since the Spellbinder's barrier skills are very effective in battle, strengthening these skills is important.

Furthermore, "Time Warp", which can be acquired at level 45, increases movement speed by 3% when the characters health is above 80%. This skill is useful if all enemies are wiped out before they get too close, but it may not be so effective if equipment or control of the character is not up to the appropriate standard.
"Essence Absorption", which can be acquired at level 25, recovers up to 5% of the Spellbinders HP when the enemy is finished with a critical strike. If used with the Hysteria artifact, which enhances critical-hit ability, this skill may be very effective. However, if the character is not in the position to inflict critical hits, the effectiveness of this skill will be diminished.
"Spiritual Stimulation" decreases damage taken by 5% when there are more than five enemies within a 10m radius, increasing the survivability of the character. As it facilitates grinding, its a go-to skill for everybody, but may not be so effective for playstyles that are more focused on kiting and pushing enemies away. 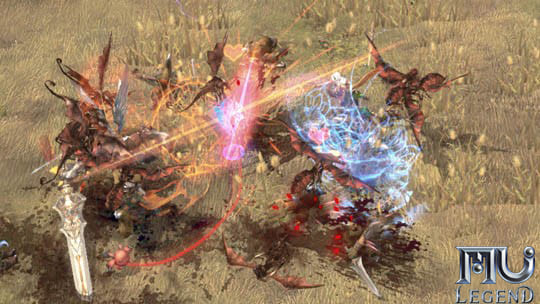