The War Mage uses strong magic powers to destroy enemies on the battlefield. Although his defense is low, his attack powers are enough to make him a good damage dealer. He is versatile enough to respond to various situations, making him complex and therefore the hardest class to master in MU Legend.

His staff is mostly used for ranged attacks, and when he couples his magic sword with his secondary weapon, the grimoire, he can deal melee attacks. In this way, he can be used for both close and long-range damage dealing. If you want a hybrid character that utilizes powerful magic, the War Mage will be perfect for you.

The War Mage is a powerful and efficient damage dealer 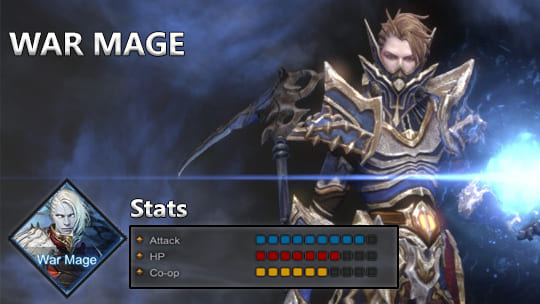 The War Mage is very competent in ranged AoE and melee attacks and can handle both single targets and groups. He can also deal abnormal-status attacks, making him an ideal class for strategic fighting.

He has relatively low HP and defense, but has the most powerful area attacks. You can build your War Mage in many ways, such as a mage-type using a staff or an assassin-type wielding a sword.

The War Mage's magic attacks are the most elaborate out of all the classes, and his magic powers can destroy enemies in a wide area.

He can be used as a ranged damage dealer or as a melee damage dealer, moving fast like an assassin using a sword imbued with mana. He has crowd control and other highly effective attacks that let him respond to situations flexibly, allowing him to quickly dispatch enemies.

The War Mage is perfect for those who enjoy an aggressive gameplay style with unique magic attacks in a fast-paced battle. Keep in mind that his HP and defense are relatively low compared to his attack, so you must pay attention to survive. 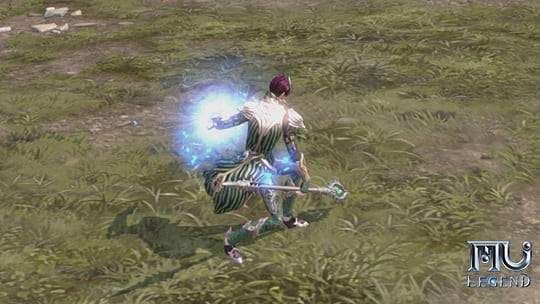 The War Mage's battle style differs greatly depending on the weapon that you decide to equip. Equipping the staff will grant him the ability to perform mostly ranged attacks, while equipping the magic sword and the secondary weapon, the grimoire, will produce a melee-assassin type of character. This means that the War Mage is a kind of hybrid character that can be transformed to your liking.

The staff, a weapon befitting of a mage, allows him to use ranged attacks. He can also use various magic skills from a distance. These ranged attacking abilities make him useful when playing in a party.

On the other hand, when equipped with the magic sword and the grimoire, he becomes a melee type. In this state, he needs to adjust his distance to be able to effectively use the ranged magic skills as well. The War Mage has weak defense, so melee battles will require the use of enhancement and protection skills.

He's not an easy character to control, but the difficulty increases even more when he's equipped with a magic sword. If you want to be a mage-type character, use the staff, and if you want strong melee attacks, use the magic sword. 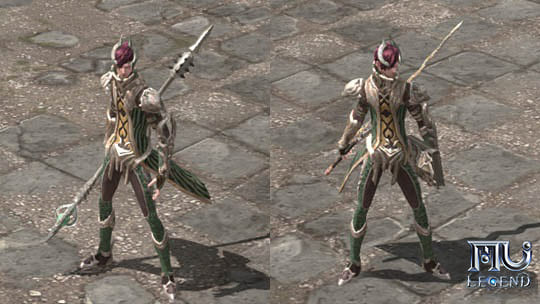 The War Mage, equipped with the staff (left) and the magic sword and grimoire (right). 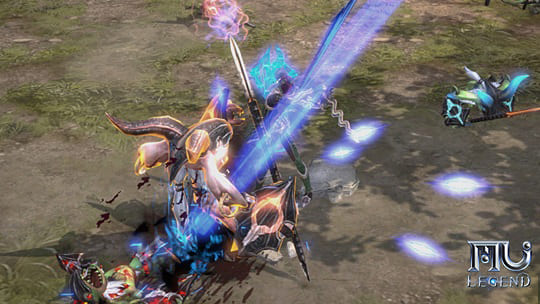 Add mana to the magic sword to deal melee attacks.

Weapon skills: Choose your preference, the ranged staff or the melee magic sword

Ranged skills for the staff include the "Chaos Orb", "Energy Explosion" and "Shockwave", and skills for the magic sword and grimoire include "War Veteran", "Marching Blade" and "Torment Wave". Choosing the staff grants you increased damage to targets more than 10 meters away, and choosing the magic sword grants increased damage to targets within 9 meters.

The staff skill "Chaos Orb" throws magic orbs as a ranged attack and deals additional AoE damage over the area behind the target that is hit. "Energy Explosion", an exploding energy orb thrown by the War Mage, deals AoE damage and causes an additional explosion once an enemy is killed. Also, "Shockwave" is a shock-bomb attack that deals AoE damage and reduces the movement speed of enemies.

The magic-sword skill "War Veteran" uses a sword imbued with dark energy to slash enemies, pushing them and inflicting a debuff that reduces their defense on every third attack. "Marching Blade" slashes the sword to the front, with a chance to ignore 10% of the enemys defense. "Torment Wave" deals AoE damage to the front and deals additional damage to 3 nearby targets on the third hit. 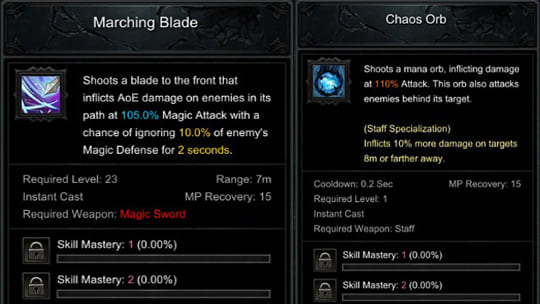 Each weapon grants you unique advantages.

The War Mage has powerful magic-attack skills, the first of which is a fire-magic skill called "Fire Clutches". This skill ignites a fire in one spot to deal AoE damage and continuously inflicts additional damage while the fire is burning.

"Radiant Chain" casts a magnetic field. As a charge-up skill, it will continue to be cast as long as the hotkey is pressed, dealing damage to surrounding enemies with chains. "Fire Curtain" deals continuous damage by igniting the ground, so its similar to "Fire Clutches", but more powerful.

"Reapers Light" shoots out a beam of light, dealing damage to all enemies in its path. Its a charge-up skill, so it can be maintained as long as you have MP. Additionally, the damage amount increases in 3 stages. "Danse Macabre" lets you teleport to a designated spot. As soon as you land, you slash the enemy, so its perfect for the magic sword. If you use "Fire Clutches" within 2 seconds, you can go back to your original location.t

Hold down the hotkey for "Radiant Chain" to continue casting. 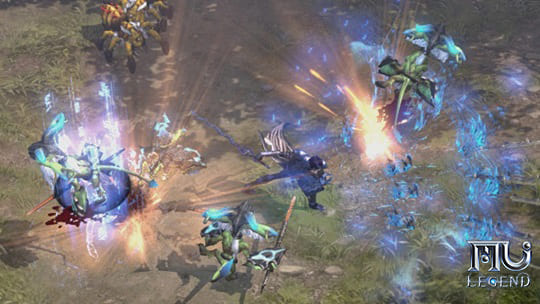 The magic sword and "Danse Macabre" go well together.

For battles where abnormal statuses will give you the advantage, throw magic shards to reduce enemies movement speed with "Power Slash". You can also use "Cold Murder" to mount a spinning stun attack to enemies in front. Summon a giant ice storm with "Binding Blizzard" to deal damage to a large area and decrease speed within that area.

"Cruel Touch" pushes a target in front while you retreat back. The enemys movement speed will decrease and you will deal additional damage 3 seconds later with an explosion. "Mana Racer" releases Pegasus, dealing ranged damage and ensnaring enemies in the spot it stops at.

Also, "Full Throttle" causes an explosion and teleports you ahead while granting you stealth. "Specter Shield" is a useful skill for survival, allowing you to absorb damage as health up to 20% of max HP. If the shield is destroyed, its shards will deal AoE damage to surrounding enemies.

"Bloodfest" lets you jump into a location to attack enemies left and right. You will be invincible while its active, so it can be used as a survival skill when in danger. Lastly, "Hallucinatory Infection" contaminates a certain area to deal damage. If the target dies, the infection is transmitted to another target and you can recover 25% of max MP. 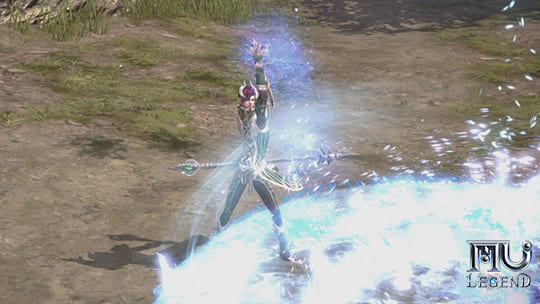 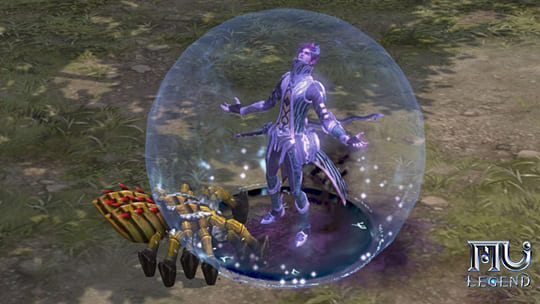 The War Mages 6 expert skills are "Confusion", "Wallop", "Destruction", "Invincibility", "Pain" and "Devastation". "Confusion" has a passive effect that decreases the defense of enemies within 20 meters. It also allows you to cast "Specter", a charge-up skill which summons evil spirits to deal continuous damage to surrounding enemies.

"Wallop" has a passive effect that increases your max HP and defense, and the "Final Notice" skill that deals a strong attack to the front. If the targets HP is below 30%, "Final Notice" can inflict additional damage. If you use the skill again within 2 seconds, you can send an additional wave of energy, pushing the enemy far away.

"Destruction" has a passive effect that decreases MP consumption. You can also use the "Meteor Drop" skill, which drops a giant meteor in a selected location. The meteor has immense attack power, and all enemies hit by it will be pushed back and receive additional continuous damage. 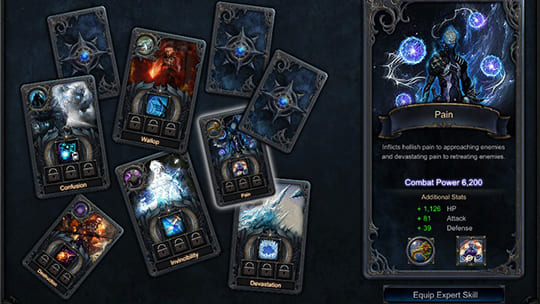 Level up and learn special skills.

"Invincibility" is the best survival skill for the War Mage, which includes the "Glacier Prison" skill. "Glacier Prison" encases you in ice temporarily, making you invincible. When the ice breaks, the shards will deal damage to surrounding enemies and will reduce their movement speed. "Invincibility" also has a passive that stuns enemies when the skill is cast multiple times.

"Pain" increases your attack power by up to 9% depending on the number of enemies around and lets you use the "Mana Discharge" skill that spins 5 orbs around you. The orbs stay for 20 seconds and deal continuous damage to surrounding enemies. When the skill is cast, the orbs will be thrown up to 5 times.

"Devastation" allows you to reduce the cooldown for all skills and also lets you use the "Ice Wall" skill that creates an ice cyclone. The ice cyclone breaks after 2 seconds, dealing damage to surrounding enemies and freezing them, so it’s a powerful abnormal-status attack. 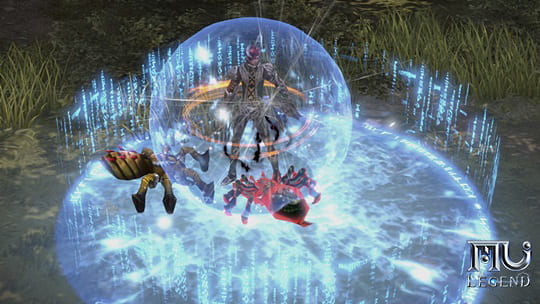