Currently the only female class and a powerful ranged damage dealer, the Whisperer is the quickest class with the greatest attack speed in MU Legend. Her attacks are very effective, and although her defense is weak, she can hunt relatively safely as long as she maintains distance.

She uses the wing gun and the longbow, and carrying a wing gun in each hand is one of her distinctive features. The Whisperer is able to hunt fast thanks to her mobility and is stronger dealing damage to single targets rather than with AoE attacks. So, if you want fast-paced action and have a for taste powerful ranged attacks, the Whisperer is the class for you.

The Whisperer has the fastest movement and attack speed of all the classes, and is also a good ranged damage dealer. She concentrates max power on one target, minimizing damage with high evasion.

She's a ranged damage dealer with high mobility and is capable of employing a wide range of strategies, using bows, smoke shells and even the power of nature.

She moves like the wind, and makes the battlefield advantageous to her with her bow and traps.

The Whisperer moves through the battlefield as fast as the wind, dispatching enemies so quickly that it's said that she whispers death to her enemies. Her movement speed is much faster compared to other classes, and her high dexterity along with her powerful bow make the Whisperer a great ranged damage dealer.

Her high mobility lets you rush through areas very quickly. Her strength lies in attacking single targets rather than in AoE attacks, so she's very effective against bosses. Her defense is low, but her fast movement and evasion can help her avoid taking too much damage.

Her effectiveness drops a little in places where mobility is restricted. However, she performs well in most other areas, so it won't be hard to level up. The Whisperer is a great choice for players who have a penchant for high-mobility characters with swift attacks. 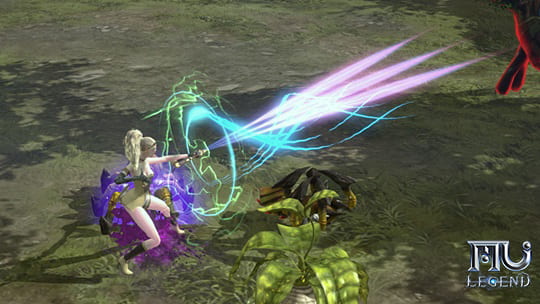 The Whisperer's arrows are very powerful.

The wing guns have low attack with high attack speed, and though their range is short, they are effective when dealing AoE damage with a buckshot attack. The longbow has greater attack power than attack speed, and is very effective in dealing long-ranged single attacks. To sum up, the wing guns are better for AoE attacks and the longbow is better for attacking a single target.

So, in a party where another player is leading from the front, the longbow will be more useful. In a solo battle where you have to engage in fast combat, the wing guns' AoE attack will be more effective. Furthermore, in addition to simple ranged attacks, the Whisperer uses various battle strategies such as setting traps, dealing damage with explosions or tricking enemies with smoke screens to hide.

Throw flames with the wing guns.

"Piercing Arrow" penetrates enemies, dealing damage to multiple foes in its path. It also has a chance to reduce movement speed. "Poison Arrow" doesnt deal much damage. However, it poisons enemies and deals the damage continuously, and sometimes a poisonous insect will appear to inflict even more damage. "Multi Arrows" shoots multiple arrows at once, resulting in an AoE attack.

"Frontal Shot" uses the wing guns to deal AoE damage, pushing enemies back with its immense power. "Flamethrower" deals continuous damage to the front for as long as the attack is maintained. It also has a chance to ignite enemies and inflict continuous damage, but the range is short. Lastly, "Salvo" is a super-fast attack with very low attack power. 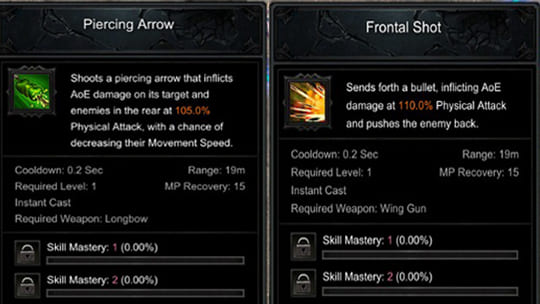 Each weapon grants you unique advantages.

Also, "Electric Explosion" deals an abnormal status and is strategically useful as an initial attack. When this skill hits enemies, it emits an explosion that deals damage and reduces the movement speed of foes within the area of effect. "Condensed Shot" is a powerful skill that deals consecutive attacks. This skill is useful when you want to gain distance from enemies.

"Chasers Trap" sets a trap that explodes when stepped on, reducing the enemys movement speed. "Will of the Wild" deals great damage, binding enemies and temporarily preventing them from moving. "Smokescreen" throws a smoke bomb to a selected location, momentarily blinding enemies within range and making all their attacks miss.

Use "Electric Explosion" to electrocute and slow down enemies.

There are many buff/debuff skills available for the Whisperer. You can use them to weaken your enemies and also to enhance your abilities along with those of your allies. "Roll" is used to increase attack power and evasion. "Multi Kill" summons a hail of arrows to a selected area, dealing damage and reducing enemiesattack speed. This skill reduces the amount of damage that you receive.

"Wind Sprint" increases movement speed by 50% for 8 seconds, ignoring collisions and increasing your mobility. "Natural Assimilation" is a stealth skill that enables you to vanish in a puff of smoke. Also, when hidden, attack speed and attack power increase, so it can be used as a buff skill to turn the tables when in danger.

"Death Sentence" leaves a mark of death which deals damage when it explodes after 5 seconds. The targets defense decreases by 50% while the mark is active, allowing for tremendous damage to be dealt. "Green Sanctum" increases the attack speed of you and your allies for 10 seconds, so its a useful buff for party play. 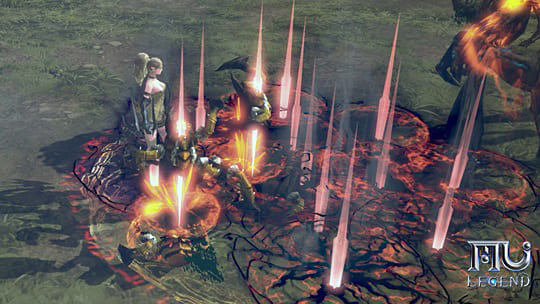 "Multi Arrows" deals a powerful attack over a wide area. 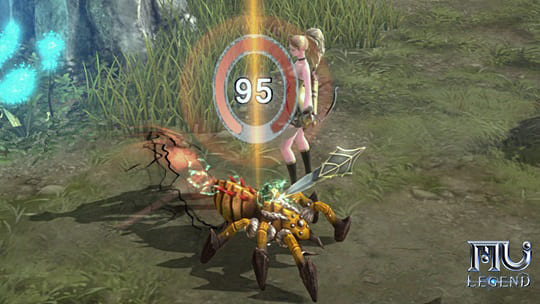 The number on the "Death Sentence" mark shows the time left.

Expert skills can be learned as your level increases, and you can choose from "Bombardment", "Summon", "Absorption", "Chase", "Deceleration" and "Berserk". "Bombardment" reduces the defense of all enemies within 10 meters by 5% with the "Earths Blessing" skill. It also features the "Bombardment" skill that throws a tracker to a selected area to summon a hail of arrows.

On the other hand, "Absorption" has a passive that increases attack power, along with the "Tree of the Otherworld" skill that summons an Ent to a selected area. The summoned Ent will generate a vortex to pull in enemies nearby, dealing continuous damage.

Which expert skill will you choose?

"Chase" will increase your movement speed and grants the use of "Torment Wall", which summons a circular wall to deal damage over a selected area. The wall stays for 4 seconds, trapping enemies and dealing continuous damage to those inside.

"Deceleration" increases defense every time you receive damage and grants the use of "Torment Magnetic Field", allowing you to set up a new type of trap. The trap creates a magnetic field that moves forward through the battlefield, attacking and stunning all enemies in its path.

With "Berserk", youll get increased attack speed when you have over 90% HP. You can also use "Madness Power", which strengthens the weapon and increases attack power by 100% for 5 seconds. Its a skill that increases attacks greatly in a short amount of time, but youll receive more damage as your attack power increases. So, be careful when you use it, and make sure you can keep your distance from enemies. 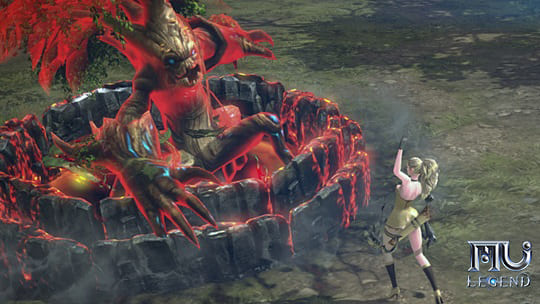 "Torment Wall" is obtained through "Chase".