A variety of dungeons, featuring all kinds of enemies and rewards!
As you play through the game, you'll experience lots of different types of dungeons, each serving a different purpose in MU Legend. You'll come across Normal Dungeons, the basic dungeons which are cleared during the course of quests, as you level up and advance through the story.

Epic Dungeons are a little more difficult than Normal Dungeons, but they're the best places for farming equipment. You can enter the Rift up to 10 times a day, and it's a great place to stock up on much-needed items and EXP. Inside the Rift, you can find a special currency called Rift Fragments. Porystals are also found in the Rift, which are important items used to enter special dungeons.

Additionally, there are 6 separate dungeons in the Room of Duty, each with a daily entry limit. You can obtain Zen, Magic Gems, Enchanting Stones and other materials inside these dungeons, so it's best to clear them every day.

Experience the various dungeons in the game.

Dungeons Have Different Features and Rewards: Choose One That Suits Your Needs

Dungeons are mainly for parties, and you can either form a party of your own or use the auto-matching system to find random players. In order to enter a dungeon with a party, all members need to agree, and they must all be in the area where the entrance is located. You won't be able to enter again once you leave a dungeon, so keep this in mind when you're thinking of exiting.

All party members need to agree to enter the boss room inside the dungeon, and all members must also be on the same floor. If you die while battling the boss, you will resurrect outside the boss room, and you won't be able to enter until the battle is over. However, if you use a Resurrection Stone or if an ally resurrects you, you can rejoin the battle right away.

For some dungeons designed for farming, you can complete them immediately through Subjugation. To use the Subjugation feature, open the Game Menu (ESC) and click on a dungeon in the list to the left to see that dungeon's information window. From there, click on the the Subjugation Request button. You will require Redzen to perform a Subjugation request. You will need to have cleared the dungeon at least once before, and the Subjugation will be applied based on that record. The number of Subjugations available will depend on the entry limit for that dungeon. 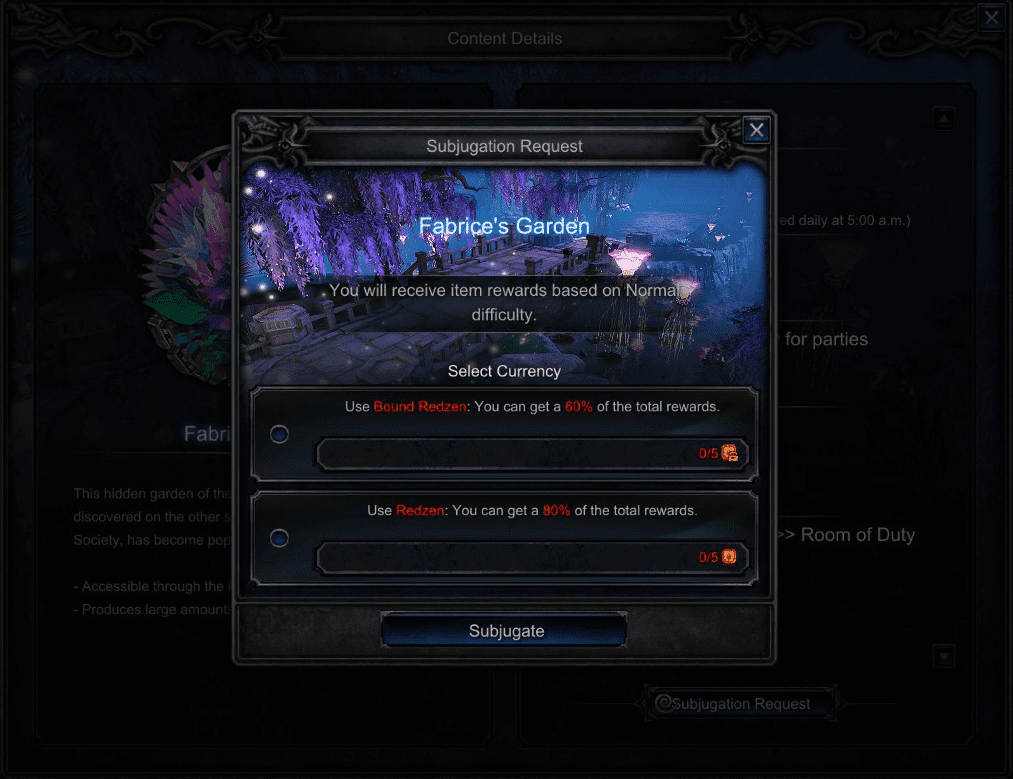 Use Subjugation to obtain dungeon rewards quickly and easily.

Uncover the secrets of the MU continent through Normal Dungeons

Normal Dungeons are the most basic of the dungeons in MU Legend, and with no entry requirements, they can be entered by anyone. Here, you will complete quests and obtain equipment while leveling up. They can be played in Normal and Mythic modes depending on the dungeon, and each mode has 5 difficulty levels.

Higher difficulty means stronger monsters, but it also gives you the chance to get better equipment and rewards. Legendary items can be obtained in Normal mode, while Mythic mode gives you a chance to obtain Mythic items. However, Mythic mode is only available in the last dungeon of each continent.

It's best to challenge higher-difficulty dungeons with a party, and when you go solo, it's recommended to set a low difficulty in order to complete the quest. Also, specific dungeons are located in different places, so you must find the relevant entrance of the dungeon you wish to enter. All party members must be in the area if you want to enter with a party, and everyone must agree before the dungeon can be entered.

Although Normal Dungeons are usually cleared while completing quests, they're also great for when you need equipment, various materials or consumables. So, when it comes to leveling up your character as well as obtaining equipment, Normal Dungeons are invaluable farming locations for those with low combat power. 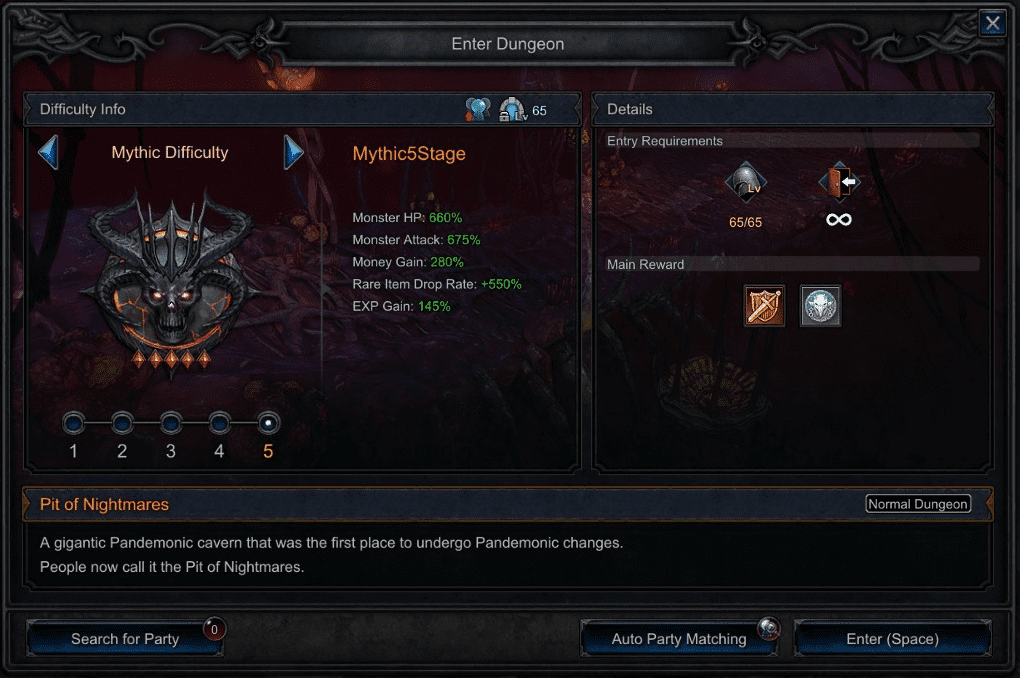 Epic Dungeons can be found out in the open just like Normal Dungeons, and the abundance of items found within makes them one of MU Legend's main farming dungeons. These dungeons are mainly for players who have leveled up and are looking for better equipment, and there's 1 on each continent starting from Duelden.

Epic Dungeons have 5 difficulties. A word of warning, however: level 1 of an Epic Dungeon is more difficult than the highest level of a Normal Dungeon! For this reason, you really need a party to get through an Epic Dungeon. Additionally, you must meet the minimum level and combat-power conditions, as well as have sufficient dungeon entries remaining.

Only those with a certain amount of combat power can enter; so even if you've reached the max level, you still may not be able to enter an Epic Dungeon. If this is the case, obtain better equipment through crafting/Normal Dungeons and increase your combat power with enchantment. 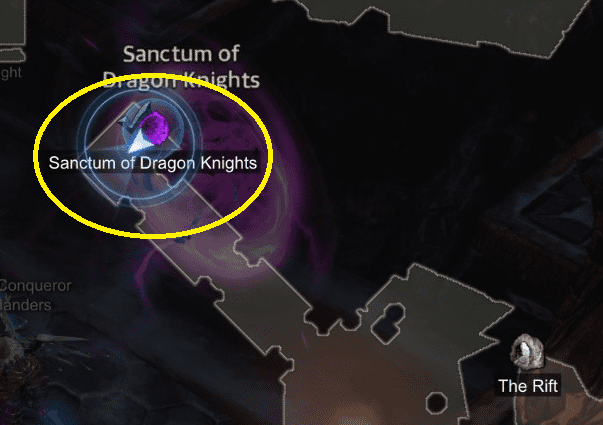 The entrances to Epic Dungeons look different on the map.

The number of entries to Epic Dungeons can be filled up to a max of 7, with 1 entry being added daily. This means you don't have to go every day, and you can do them all at once if you prefer. When with a party, all members must have dungeon entries remaining, be in the same area and agree to enter.

An entry is deducted the moment you enter the dungeon, so try to avoid exiting the dungeon or logging out before completing it. You need to be prepared from the beginning, so make sure you have all the necessary equipment, potions and consumables.

Once inside, party members can roam freely, but everyone has to agree to proceed through the boss portal. If you die while battling the boss and use Resurrect at Point, you will respawn outside the portal and will be unable to re-enter. In other words, a dead party member must be resurrected by an ally or use a Resurrection Stone to continue fighting.

You can obtain Set equipment in Epic Dungeons. 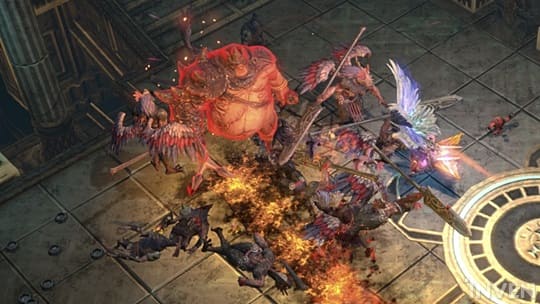 The Rift: A randomly selected dungeon with monsters matched to your level

Whether you're leveling up or simply farming equipment, the Rift has got you covered. The entrances to the Rift can be found easily on any map. It doesn't matter which Rift portal you enter; the dungeon is determined randomly each time you go through, and monsters are generated with the same level as the player.

When you enter with a party, the level of the monsters will be decided by the level of the strongest player. There are 5 levels of difficulty, from normal to evil, and all party members must be in the same area and agree to enter the dungeon.

The main rewards are items and Magic Gems. Magic Gems can be used as currency in various places, so it's best to collect as many as possible.

Unlike other dungeons, you will be ranked after you complete the Rift, and you will receive additional card rewards. Your rank is calculated based on the number of party members and the number of elite monsters defeated. You get to pick 1 of 4 cards, which then reveals an item that will be given as a reward. 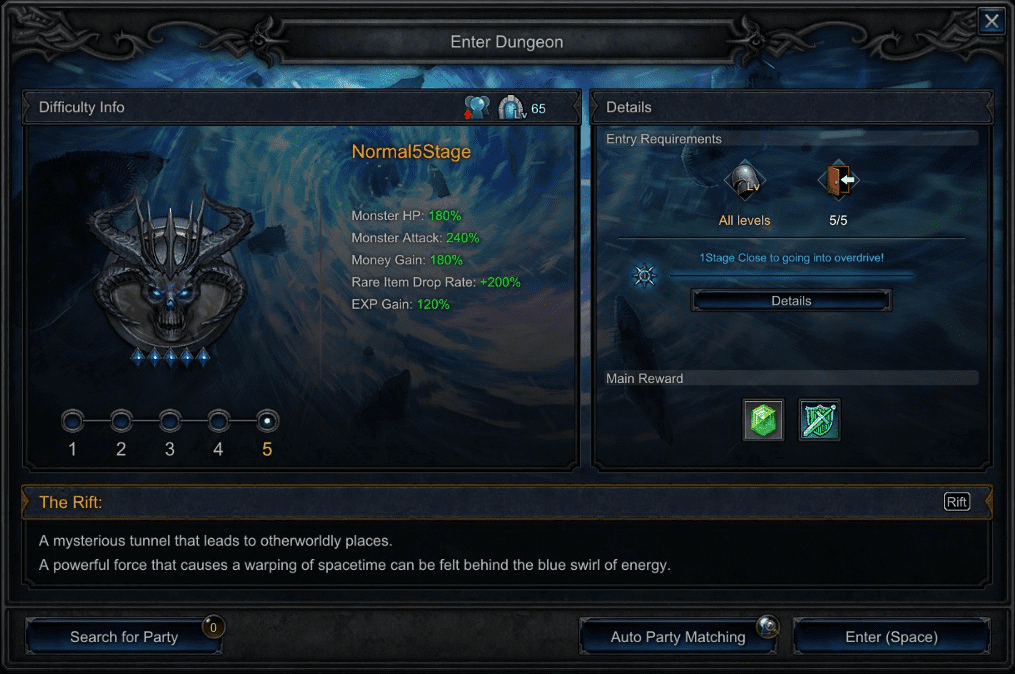 You can only enter the Rift 5 times a day.

You can enter the Rift 5 times a day, and the entry count is reset daily at 5 a.m. When the Rift goes into overdrive, you can enter as many times as you want, and even players who have used up their daily entries can enter again.

Whenever a player enters the Rift, the overdrive gauge will be filled up by a certain amount. Once the gauge is charged 100%, the Rift will go into overdrive for a certain period of time. Overdrive also affects each continent separately, so you can check the overdrive status via the Rift menu (N) and head to the continent that is nearly in overdrive beforehand.

The item drop rate increases when the Rift is in overdrive, and the number of floors inside the Rift is expanded to 3. The number of card rewards available after completion also increases. Continents that have been in overdrive before will have their overdrive level increased to Lv. 2 and receive a greater overdrive effect. So, expect to see lots of players looking for parties on the relevant continent when the overdrive time approaches.

Also, the player who causes the overdrive will get the Rift Overdriver effect, which grants an increase in attack, critical rate and movement speed. The Rift overdrive only continues for a set time, so it's important that you clear dungeons as fast as possible. It's recommended to ignore the monsters in the middle and head directly for the boss. 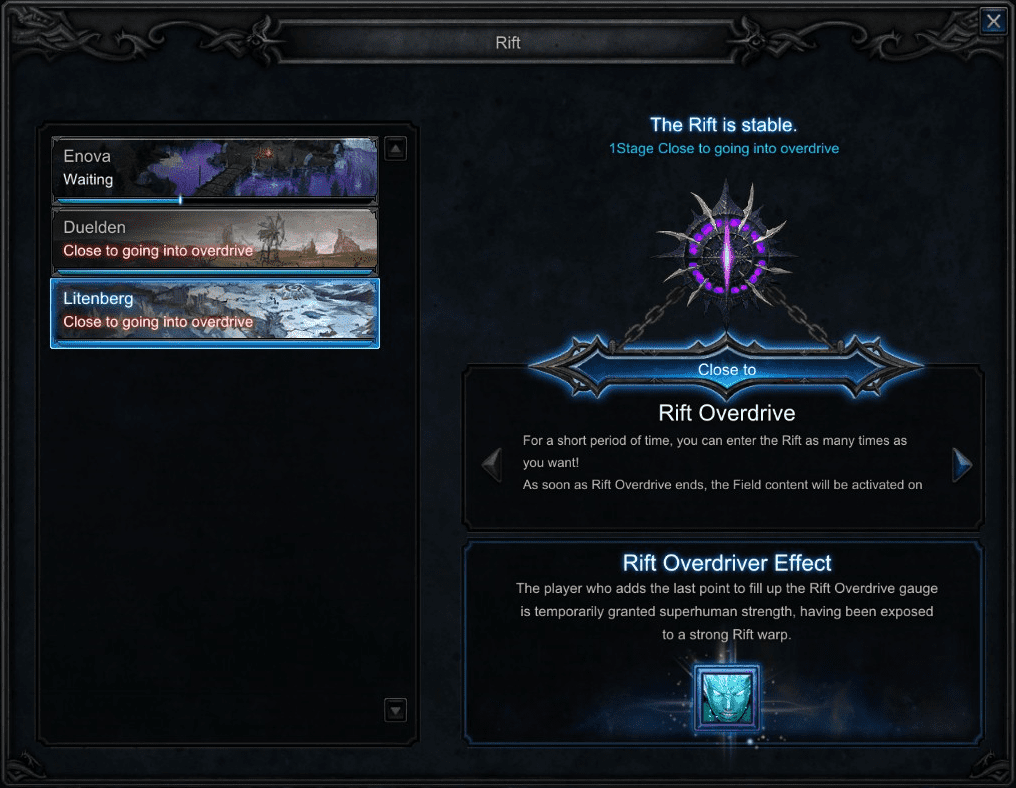 Receive a buff when the Rift goes into overdrive. 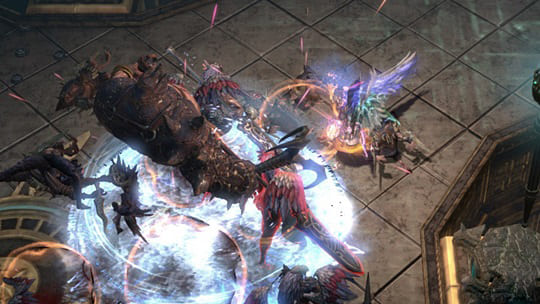 You'll never know who you'll be fighting next.

As you accumulate rewards during your adventures through the Rift, you will receive some special crystals along the way. These are called Porystals, and they allow you to immediately enter a designated dungeon without going through a portal. If you're in a party, all party members will be teleported together.

Porystals are consumable items that disappear after theyre used, and the main Porystal dungeon is "Lupas Library". This place is located deep inside the Rift and was once used by Lupa to study its inner workings. Very powerful enemies await you there.

You can receive Rift Fragments as a reward for clearing this dungeon. Rift Fragments can be exchanged through a merchant to receive random set-equipment chests, so you should collect as many as you can. 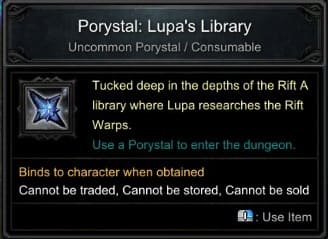 You can use a Porystal to immediately enter a special dungeon. 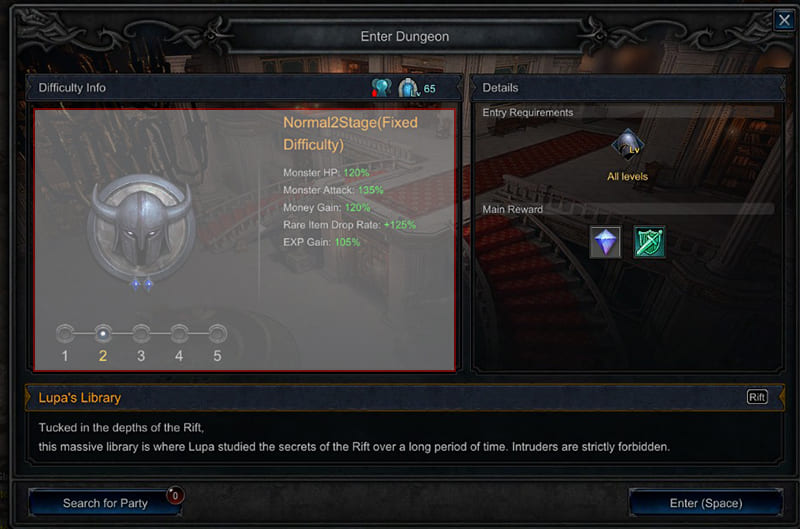 Room of Duty: Reap the rewards in special dungeons

This is a place that keen players of MU Legend must visit every day. Ohrdor's Room of Duty contains special dungeons where you can get specific rewards found nowhere else. You'll find 5 different dungeons in the main room (Lupa's Labyrinth is in a separate room to the side): Endless Tower, Warped Magic Gem Mine, Blood Castle, Luery's Secret Vault and Fabrice's Garden.

These 5 dungeons have a daily entry limit, so it's important that you go every day and get the most rewards. The dungeons also have level requirements, so make sure you level up first. The level requirement for the Endless Tower is Lv. 65. Fabrice's Garden, Warped Magic Gem Mine, Blood Castle and Luery's Secret Vault have their requirements set to Lv. 25, 35, 45, and 55 respectively.

The Endless Tower is the go-to dungeon for wing-enchantment materials. If you're short on Magic Gems, the Warped Magic Gem Mine and Blood Castle (time-attack dungeon) are the places to go. You'll find lots of Zen in Luery's Secret Vault, and Fabrice's Garden is where you'll get various rare materials that are needed for crafting.

You can select the difficulty (1 to 5) for the Warped Magic Gem Mine, Luery's Secret Vault and Fabrice's Garden, just like in a Normal Dungeon. However, there's no difficulty selection possible for the Endless Tower and Blood Castle. Instead, the higher you go in the Endless Tower/the faster you complete Blood Castle, the greater the rewards you can get. 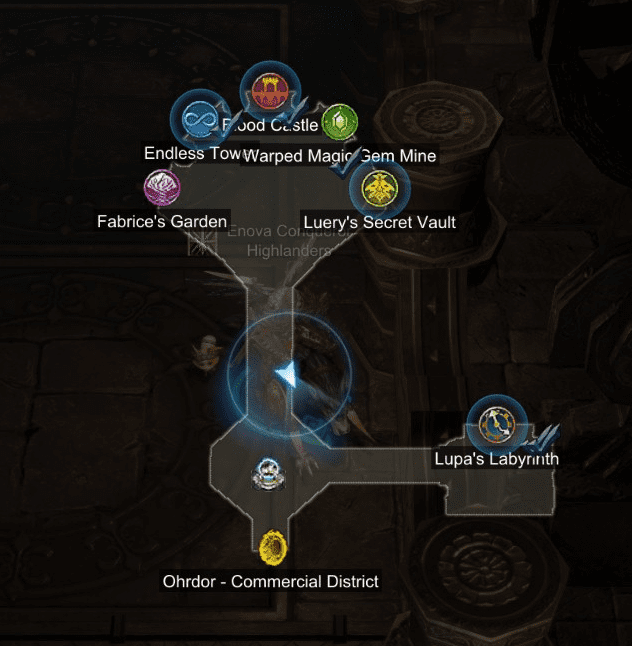 Room of Duty: Enter different types of dungeons from here. 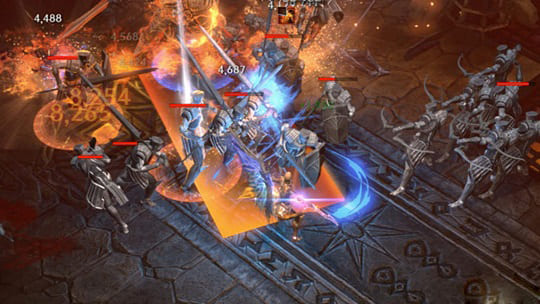 You'll find lots of rewards inside the Room of Duty's dungeons.