Increase your combat power with enchantment and crafting!
In order to safeguard the future of the MU continent, players need to become as powerful as possible. When it comes to raising combat power, equipment enchantment is definitely the most important factor. Enchanting your equipment will result in much stronger overall combat, improved dungeon-clearance times and better PvP performance.

There are many ways to make equipment stronger in the game, from regular enchantment to the use of gems and soulstones. Wings are one of the core items in MU Legend for which you will need exclusive enchantment materials. Wings can also be evolved to enhance them even further.

Also, you can craft various kinds of equipment and consumables via crafting NPCs using the materials obtained from hunting. Crafting is an important means of obtaining the best equipment, as you can also craft Legendary and Mythic items. 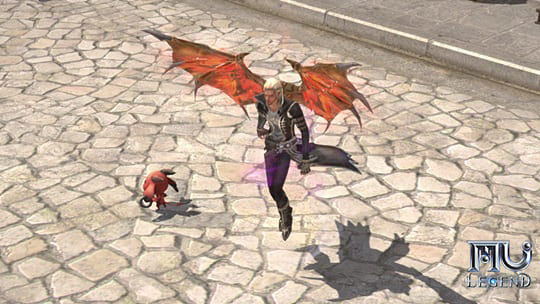 Strengthen your characters with enchantment and crafting.

Use Enchantment to Boost Stats and Upgrade Items

Open the character Inventory (I) to see the available equipment slots, which consist of 2 slots for weapons, 6 for armor and 3 for accessories. There are also slots for wings and outfits. If you equip a two-handed weapon, only 1 of the 2 weapon slots can be used, and when you equip a one-handed weapon or a secondary weapon, you'll be able to use 2 slots.

Equipment is divided into 9 grades, which are Common, Uncommon, Rare, Heroic, Legendary, Ancient, Mythic, Set and Unique. They also have various stat options, in addition to attack and defense. The higher the grade of the equipment, the more additional stats it offers. Stat values will also increase based on the level and grade of the equipment.

3 types of equipment enchantment are available, from regular enchantment to equipping gems

You can enchant equipment to boost basic performance, or you can equip gems and soulstones for additional stats. However, accessories such as necklaces, earrings and rings cannot be enchanted or equipped with gems.

Enchanting equipment will boost basic stats such as attack and defense, increasing the overall combat power of your character. You must go to the enchantment merchant NPCs in villages to enchant items, and you will need Jewels of Bless as well as Magic Gems and Zen.

Enchantment can be performed safely up to +3, but there's a chance the enchantment level may be reduced on failure after that point (from +3 to +9). Also, be aware that starting from +9, the equipment might get destroyed if enchantment fails. Higher enchantment levels mean higher risk, so it's better to use Jewels of Soul which slightly increase the success rate. The max enchantment level is +15.

You can enchant equipment via enchantment merchant NPCs.

You can also add gems and soulstones with various effects to your equipment to get additional options. Soulstones are divided into common and class-exclusive Legendary types. Most of them are obtained by crafting while others are obtained via hunting.

These high-grade stones provide an excellent boost to your character's abilities. Soulstones are not easy to craft; they require boss materials and Sage's Stones that can be obtained through alchemy. You can equip gems by going to the inventory and right-clicking on the gem, then left-clicking on the desired piece of equipment. If the item already has a gem, that gem will be destroyed.

You can also use a Gem Removal Hammer to safely extract the gem. This allows you to extract the existing gem without losing it, so if it's a gem you had a hard time obtaining, it's better to extract it rather than destroy it. An item must have a slot added to it before a gem can be equipped, and this can be carried out by gemcutter NPCs in villages. You will need Zen, Hero Tokens as well as various materials obtained by dismantling items.

Unlike enchantment, you can also add gem slots and equip gems to accessories, which will increase the effectiveness of necklaces, earrings and rings. Hero Tokens are also used as materials to craft some other items and can be obtained in Blood Castle or by defeating elite monsters. 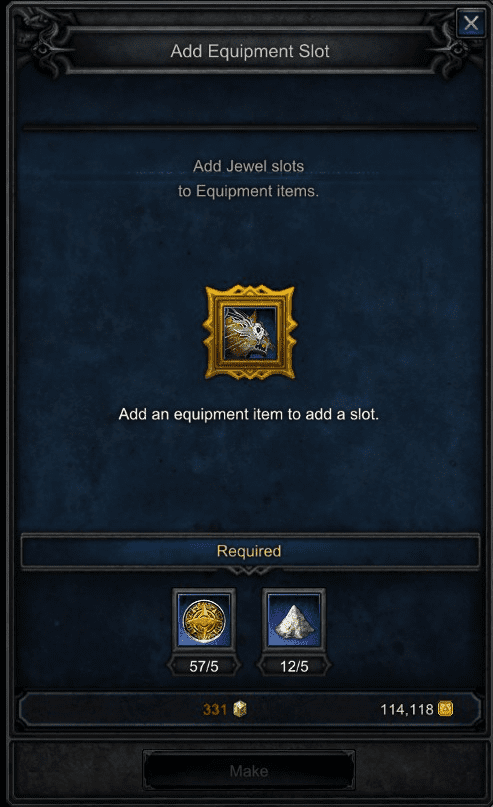 To equip gems, you must first have a gemcutter NPC add slots to the equipment.

Wings are the signature items of MU Legend. There are various types of wings, each with their own unique appearance. Stats such as attack, accuracy, damage reduction and HP boost can be enhanced through wings, so they are very useful in increasing combat power.

You can also enchant wings just like any other piece of equipment through enchantment NPCs. Enchanting your wings will increase their stats, boost your combat power as well as change the wings' appearance. While Jewels of Bless are consumed during regular enchantment, wing enchantments require Magic Gems, Zen and special materials called Wing Growth Stones.

You can grow them up to level 10, and wings that have fully grown can be evolved to the next tier with Magic Gems, Zen and Wing Evolution Stones. Evolved wings get higher stats, so evolution can be thought of as another form of enchantment.

Wings that are evolved will get their growth status reset, so you will have to grow them again. You can continue to grow and evolve your wings like this to make them even stronger. You can exchange Seals of Power for Wing Growth Stones and Wing Evolution Stones through the merchant in Ohrdor. Seals of Power can be obtained as rewards in the Endless Tower, which can be entered via the Room of Duty after reaching level 65. 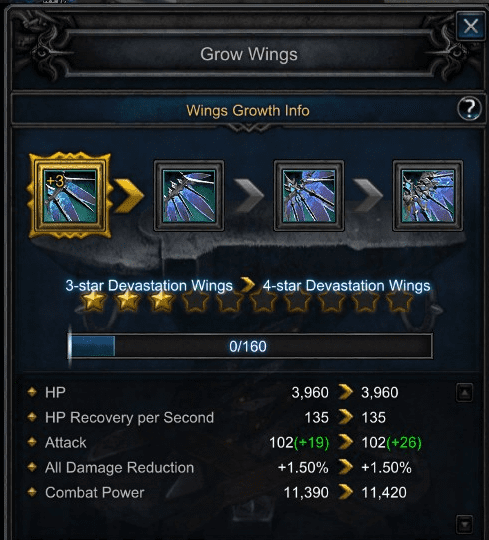 When you enchant wings, their stats and appearance will change.

You must obtain Seals of Power from the Endless Tower to grow wings.

Meet crafting NPCs in villages to craft various weapons, armor, accessories, gems and consumables. The ability to craft is not affected by level, so anyone can craft various types of items as long as they have the necessary materials.

You can check the list of items you can craft via the relevant NPC. You can also use the filter to search for the item you want or check the crafting list for other classes. Crafting materials can be collected by hunting, or alternatively you can dismantle unneeded equipment with the help of a merchant.

It can take a long time to collect enough materials for crafting top-grade items, so it's important that you keep hunting as many monsters as possible and make a steady effort to collect. On the other hand, crafting top-grade equipment requires rare materials that can be difficult to obtain, as you have to defeat the designated bosses in order to get them.

The better the item, the stronger the boss will be, so you must prepare accordingly. For tough battles, it's best to craft HP potions, buff elixirs and also various gems to enchant your equipment. So, be sure not to overlook crafting, as it could be the difference between life and death for your character. 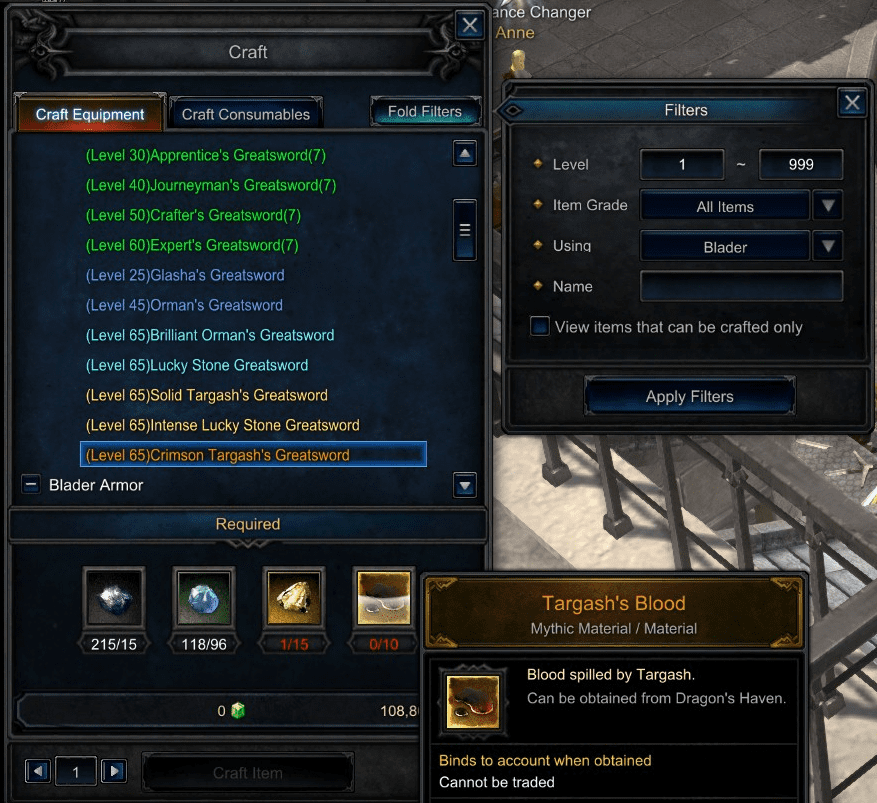 For top-grade items, you will need materials from bosses.